Extras: Treasure in the Attic

Madeline grinned at the effortless bond of a six year old and her new puppy frolicking in the attic.  Some things even the ripples of time could never change.

Together, they rummaged through boxes of outgrown toys and forgotten clothes. Maddie opened a trunk and caught her breath.  A corset lay inside along with a brown toned photograph.  They rested on what surely must be a wedding gown.  She lifted the corset remembering how she wore such a device that restricted breathing and movement while serving on Queen Isabella’s court.  Now, in this modern age, corsets were unheard of.  Progress, the professor would call it.

“What’s that?” Kimmy examined the cast aside garment.

“Something ladies used to wear,” Maddie explained absently.  Her fingers slipped over the smooth satin and stiff lace of the gown, flooding her with memories of ballrooms where she would have worn something similar and acted from a position of authority.

She examined the brownish photograph, recognizing the bride’s gown as the dress in the truck. The eyes of the professor’s grandmother, the woman downstairs, looked back from the photograph. She was surrounded by her family causing Maddie’s heart to ache.  Her own brothers and father were still in 1853.  Did they even know she had disappeared?  Homesickness buckled her knees, forcing her to collapse on the edge of the trunk.

The photograph glass reflected a shadowy vision of Maddie’s face. She stroked her “modern” hair, no longer the long coiled tresses of 1853. Would her family even recognize her if they could see her now?

Of course, that depended on the professor’s ability to send her back through time.  To do that, he’d first have to believe she truly came from 1853 and not simply consign her to a straitjacket.

“Maddie, look at me,” Kimmy squealed. She had managed to slip on the corset, the tiny waist cupping her small hips while the top protruded outward like a funnel. “It’s a puppy pocket!”

She lifted and placed her spaniel pup down the corset front, giggling as the puppy licked her chin.  Madeline laughed.

“Kimmy, are you up there?” her father called.

His low sensuous voice made Maddie yearn for what could never be.  She imagined his face as the groom and hers as the bride in the photograph.  But he was engaged to another and, as his fiancé frequently reminded her, she was just the babysitter.

“Coming!” Kimmy yelled. With a stubby hand holding the squirming pup, she raced for the steps, the long corset laces trailing behind. “Daddy, wait till you see what I made!”

“Careful,” Maddie warned, but she knew the child hadn’t heard.  Soon the professor’s laughter drifted up the steps, joined by that of his daughter.

The professor is the key, the words whispered in her thoughts.  He’s the way home.  Her heart squeezed tight with love and longing.  But if he could send her back through time, she wondered, would she dare to go? 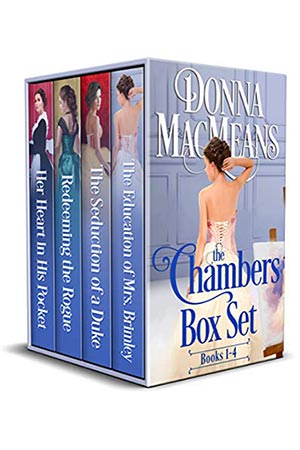