Excerpt from The Whisky Laird’s Bed

When no one rushed for the door or reacted to her impassioned cries to flee, Claire realized to her extreme embarrassment that the logic that prompted her flight to Scotland may have been a bit flawed.

The supposed captives were not huddled in distress but rather dressed to the nines as if for a party.  Instead of bustling the fallen Miss Townsend to a secret locked chamber, a man with a long scar carefully placed her in a comfortable chair.  The matron present produced a vial of smelling salts that Faith waved beneath her friend’s nose.  Finally the startling handsome man she suspected was the laird did not restrain her in any way. In fact, he ignored her as he strode past her into the night, giving his guests liberty to remain or leave. These were not indications of men intent on snaring innocent women for nefarious purposes.

And if that wasn’t enough, the annoyance reflected in Faith’s eyes as she glared her way sealed her suspicions that she’d made a serious error in judgment.

“What are you doing here, Claire?  You’re supposed to be in London.”

“I thought you were in danger.”  She stiffened her back, her intentions were honorable, even if her presumptions were not.  “I thought I’d find you held captive to a white slaver.”

“The laird?  A white slaver?”  The man with the scar chuckled.  “He’s been called many things, but that’s a new one.”

Miss Townsend stirred and opened her eyes, causing fresh administrations from Faith and the scarred man.  Even the matron who had stood outside the circle, joined the press of bodies to tend to Miss Townsend’s needs.

Feeling foolish and excluded, Claire slowly backed from the group.  Perhaps she had over-reacted even though she had valid reasons for her supposition.  She had felt certain that Faith and Miss Townsend had walked blindly into a trap.  Hadn’t the boy on the pony cart confirmed those very suspicions when he talked about the many women who came here?

She glanced toward the doorway where she’d dropped her carpetbag.  Would they notice if she left?  She’d brought sufficient funds for a return fare, but how would she get to the train stop?  Maybe she could —

Her backside registered something immobile.  A wall?  But then a wall didn’t have two powerful hands that gripped her elbows and held her in place.

His Scottish burr slipped in her ear and set her bones to tingling.  Flushed with embarrassment, she pulled from his hold, then turned.  That was a mistake.  She stood face-to-face with the laird himself.  His dark brown hair was wild and free, so unlike the short well-ordered styles in London.  His eyes sparked with intelligence and assessment.  The vibration that started with his words, shifted downward.  A handsome devil if ever she’d thought to see one.  The ad had been honest in that.

“Why did you think I was a white slaver?”  Humor crinkled his eyes, not anger.  Some of her tension dissipated, but certainly not all.  Her body recognized the feral nature of the beast, barely attired in a shirt and kilt, and responded with an undeniable attraction.  Ridiculous, she scolded herself.  Past experience had proven that virile men such as the one before her had no interest in practical women such as herself, but the reverse certainly wasn’t true.

The very substantial grounds for her suspicions suddenly seemed less so.  She fumbled for words.  “You placed ads luring women to Scotland.  Several ads, I understand.”

He turned, then took a few steps toward a long table against the wall, picked up a decanter full of amber liquid and poured some in a glass.  Whisky!  She knew the scent.  That’s right.  The boy had said he was a distiller, a whisky laird.  The thought thickened the marrow in her bones and returned substance to her spine.  She straightened, on her guard.

“I did not,” he stated in clear confident tones.

Her mouth opened in disbelief.  She supposed a Scotch whisky distiller would be an accomplished liar.  How else could they convince themselves that they weren’t doing the devil’s work?

“I saw the ad,” she insisted, then pointed across the room to the crowd attending the swooning Miss Townsend.  “Those two came in response to it.

His eyes narrowed ever so slightly.  “I dinna say the ad dinna exist.  I said I dinna place it.”

He carried the glass of whisky to the singular man in the gathering of women.  “This should help.” “For me or the lass,” the scarred man said tightly and seemed to consider the former before he held the glass to Miss Townsend’s lips.

Miss Townsend’s eyes widened with something akin to fear, but she accepted the glass.  Claire couldn’t blame her.  The laird’s voice had a ring of authority that would be difficult to refuse.

She sipped then sputtered then coughed.  Color flushed her face as she gasped for breath.

The laird nodded, a satisfied grin on his face.  Then, much to Claire’s surprise, he returned to her side.  She was both flattered and annoyed.  How frustrating to feel attraction for the very man she should despise! 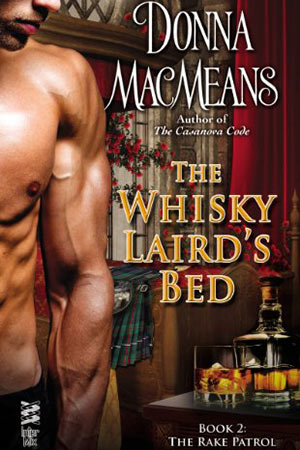