Blame the Moon, the set-up for the excerpt:

Chelsea Davenport, never considered the house she attended for a dinner party would have glass ceiling panels that allowed the full moon entrance to the gathering below.  She makes excuses and runs to a room when she feels her body start to fade to invisibility.  Borrowing a cape with a deep hood from her hostess.  She exits from a window, catches her foot and falls to the ground.  While heading back to her hotel through a woods behind the house, she encounters a boyfriend from long ago.

A gusty wind kicked at the cape’s front opening. She pulled the wool folds more securely around her. In a way it was ironic that she’d be in a New England woods so close to Halloween. Her ancestor, the headless horseman, was known to terrify a similarly situated village this time of year. Fully dressed under a full moon, he used a jack-o-lantern to pass as his head and scare the townspeople. No jack-o-lanterns to light her way. All she had was a phone to navigate her home.

A urine scent suddenly reached her nose. She glanced from her phone to see a wispy steam emerge from behind a tree, then heard the quick rasp of a zipper.

She froze. She wasn’t alone.

Music from a local tavern played nearby. This could be a customer or a homeless man. She’d seen enough homeless in Los Angeles to recognize the attributes. If she stayed absolutely still, he might never even notice that she—.

“Are you Death?” A man’s slurred voice eliminated her hopes of being unnoticed. He fumbled in his pocket mumbling, “no one will believe this” before a thud suggested something solid had struck the ground.

Crap! Discovery. If she ignored him, he might feel free to come closer. If she spoke to him, maybe she could convince him to go away. It’s not as if he could actually see her to identify later.

She slowly turned, prepared to assure him that she was certainly not Death, but he was kneeling on the ground pushing the leaves about. He didn’t look homeless, in fact, he was well dressed in a casual sort of way which meant he was most likely one of the tavern patrons. She guessed he was about her age, maybe a year or two older, and had those wide shoulders that could make a woman feel protected. A sensation she’d hadn’t experienced in a long time.

What the heck was she doing, ogling the man when she should run. Now! While he was preoccupied. She turned.

“Wait!” he said as if sensing her desire to flee. He rose to his feet with some effort. “I just want to talk.”

His gaze lifted from the ground where he’d been searching to follow her caped form from her feet up. The very eyes that had been haunting her memories and dreams for years and years, slowly raised to meet hers.

In response, his lips tilted in that familiar half smile she’d loved so long ago.

“I never thought of Death as a woman,” he said. “But it makes sense. Women have always been the bane of my existence.”

What was he talking about? What women? Why was he here in Haven Harbor? Crap! Did he recognize her voice as she had his?

He pointed to her shoulder. “You know you’re in trouble when Death knows your name and comes calling with a sparkly little purse.” He swayed on his feet. “That can’t be good.”

She glanced at her shoulder. Unfortunately, the wind that had been rattling the dried leaves overhead seized that moment to gust toward the ground and push the black hood of the cape clear to her shoulders.

Brandon could see her as she truly was, a headless cape without even a jack o’lantern for effect. 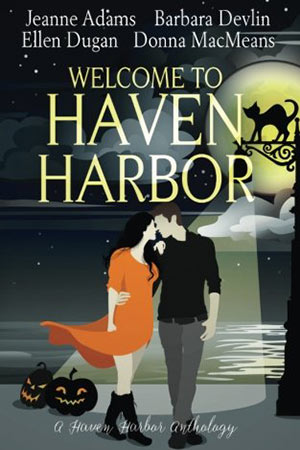