Excerpt from Dancing with Gargoyles

Roz, short for Rosalyn, is exhausted after traveling for nine hours by plane and four more by car to reach Caynham Castle. Along the way, she met a gargoyle expert named Professor Blake Nelson who is a character from Anna Sugden’s story, “A Dream of Her Own.” Roz has finally fallen asleep.

A nearby explosion roused her to consciousness. She lay still while her abruptly awakened brain tried to sort things out. Shouldn’t there be sirens, or emergency lights? Maybe doors slamming in the hallway?

But there was nothing, just the darkened room and stillness. She reached for her cellphone on the bedside table. The digital display flashed six o’clock, but it didn’t say whether it was morning or night.

"Who's there?" She called out, yanking the duvet to cover her bare shoulders. Her heart pounding in her chest, she scanned the room to no avail. Only silence greeted her. Was she dreaming and only imagined the explosion and the man’s voice with a British accent? Her heartbeat began to settle.

I won't hurt you.

Crap! She definitely heard that. She scrambled for the bedside phone, but what numbers do you push in England for emergency help? "I'm calling security," she yelled, then switched on a lamp so she could grab the hotel’s list of service extensions. She found the one necessary and punched it into the phone.

“Security. Can I help you?” A woman’s voice sounded in her ear.

“There’s a stranger in my—”

That’s when she saw him. He wasn’t a man exactly, judging by the beautiful white wings attached to his back. He sat tightly curled on the floor, his hands holding his knees. What would she tell security, that a handsome angel benignly sat in her room?

“A stranger in your room? We’ll have someone there immediately,” the woman said. “I have you in the Bride’s Tower. Can you confirm the room, please.”

The angel slowly turned his head toward her, as if even that small movement was difficult. He stared at her with the most beautiful intense dark blue eyes.

“Miss? Are you there?” the woman repeated.

“I’m…I’m sorry. I must be dreaming,” she said, hanging up the phone amid squawks of concern on the other end of the line.

"Who are you?” She asked tentatively. “How could I possibly summon someone I didn’t know existed?” Her calm surprised even her, but the angel hadn’t moved and didn’t seem threatening. She must still be dreaming. She pinched herself to be sure. Shit. That hurt.

You are the daughter of the Great Carver, are you not?

She stared. His lips never moved. Yet she heard his words. They just sounded somehow in her head.

“Who is this Great Carver person? My mother and father are Carol and David Lowry of America. I think you’ve got the wrong room.”

What other explanation could there be?

His lips twitched at the corners, almost as if he was smiling.

Many, many centuries ago, the Great Carver created my bothers and I from the limestone used to build this castle. Only his descendants can awaken the spirits within the stone. You are one of those descendants.

“Get out of town,” she said laughing. “Who put you up to this? Wait — was it that professor guy?” She snapped her fingers repeatedly, trying to remember his name. “Professor Blake Nelson, that’s it.”

The angel looked stymied. I know no professor. You summoned me. Only a descendant of the Great Carver could do —

“You’re a ventriloquist!” She interrupted, proud of her abilities of deduction. “And a darn good one, too. That must be how you can speak without moving your lips.” She’d solved the mystery. But why would the professor go to such lengths to play such a trick on someone he’d just met?

The angel’s face flashed annoyance. He closed his eyes for a minute then opened them again.

I am one of the many that watch over this castle. You’ve seen us high in the outer corners, above the doors, in some of the mantels and sitting on the hearth of your fireplace. I am one of many. You summoned my spirit and I am here to assist you in your time of need.

“What time of need? The only thing I need right now is sleep.” The angel-guy looked devastated, making her repentant of her sharp tone. “Look, I’m sorry. I didn’t mean to summon you. Can you go back to wherever you came from?”

He glanced at one of the solid stone chunks scattered about the hearth. The chunk represented one of his wings in entirety. The piece was about the size of his current hand with his fingers extended. The length of his current set of wings reached from his neck to mid-thigh.

He looked at her with dismay.

I believe that would not prove possible.

The explosion! She suddenly realized the angel sat in the same position as that hideous gargoyle. She was starting to believe she had inadvertently entered some Twilight Zone castle where gargoyles turn human. But then, given the way he looked, could that really be that bad?

“Has this happened before?”

He closed his eyes a moment as if listening to something, or someone, then opened them. I’m told that this is the first time one of us has been summoned at Caynham Castle. Descendants are rare. Your blood awakened me. I have five rises of the sun to help resolve the problem facing you.

Then I return to the earth from which I came.

“In other words, you die,” she grumbled, counting out the days on her fingers. “Five days will take you through to Friday, to New Year’s Eve. At least you’ll end with a big party.” Her awkward attempt at humor landed with a big thud. “You’re quite certain that I’m the one responsible for your transformation?”

Yes. The moment you —

A knock at the door interrupted. “Security,” a man called. 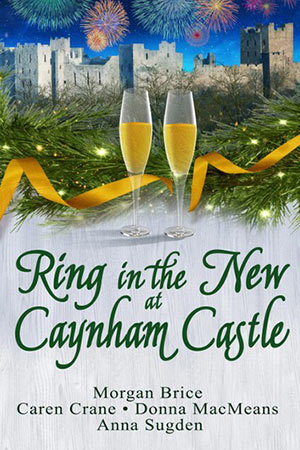