Excerpt from Her Heart in His Pocket

The excerpt is in the hero’s point of view.  Ben received a mysterious invitation to attend a ball at Caynham Castle, along with a drawing of monstrous figure.  While he realized the rumpled invitation was not originally meant for him, he comes to the castle to investigate who sent it and why.  Upon arrival, he’s mistaken for a footman named Kitzmiller who was loaned to Caynham Castle, but who apparently did not show up – so Ben rolled with it. He is surprised to discover a childhood friend, Elizabeth, who is also at the castle.  Elizabeth is a lady’s maid for a guest and who is hiding her past occupation as an accomplished pickpocket in London. Mr. Hastings is the household butler.  Clarice is a household servant that keeps the history of the castle.  She spends her days polishing silver in the kitchen.

Bish is another footman.

Elizabeth hadn’t had an easy time of it growing up in the London slums. None of them did. But he admired that she abandoned her pickpocket skills and developed new ones—legal skills, this time. Her grown-up name signaled that she had left her difficult childhood behind. One look at her curves and there would be no mistaking that she was full-grown.

At lunch, however, she looked different. She was nervous, jittery. Had she reconsidered his presence as a threat? He thought he had made it clear that he would guard her secrets.

“Kitzmiller,” Bish called. “Come and sit down here.” He patted the spot of the table next to him. “Entertain us with stories of Elizabeth in her early years.”

He didn’t need to look at Elizabeth’s stricken face. He could feel her panic.

“I think you’d be disappointed and certainly not entertained. I knew Elizabeth’s older brother back then. She was just a young schoolgirl who wasn’t interested in the manly arts of grooming horses and fishing.”

He winked at Elizabeth, then ate his meal, engaging in some of the conversations around the table. Once he’d finished, he turned toward Bish. “Tell me about the things that aren’t repeated to the guests at Caynham Castle. Is this castle haunted? All there ghosties about?” He wiggled his fingers eliciting laughter. “Any romantic stories or spots I should know of?”

“Or avoid,” Hastings added in his solemn commanding voice.

“There’s the gargoyle.” Clarice spoke from the far end of the table. The room immediately silenced. Bish had told him that Clarice had been on the service staff for more years than anyone else. She rarely spoke. She certainly looked as old as the ruins outside.

“If you kiss another where the gargoyle can see,” Clarice’s high voice recited in rhythmic rhyme, “Your true love you’ve found and will forever be.”

The room remained silent until Bish asked, “there’s a gargoyle at Caynham? A real gargoyle?”

Instantly questions unleased around the room.

“There are grotesque figures carved over the doors, is that what you mean?”

“I think every castle has gargoyles, but they’re up on the roof and channel the rain.”

“I’ve never heard of such a thing and I’ve been here for five years.”

“Where is this gargoyle?”

Hastings stood up. “Ladies and gentlemen, I believe this romantically inclined gargoyle lives with the fairies and goblins. It’s just a fanciful tale--”

“Lady Rosalyn believed it,” Clarice interrupted. “It worked for her.”

“A military man took advantage of Lady Rosalyn and left her with child,” Hastings growled. “I cannot sanction that as the true love she sought.” He glared at poor Clarice a moment before dragging his hand over his face. “I believe it’s time to dismiss this gathering. Our guests require our attention.”

Amid the scraping of the chairs, Ben leaned close to Elizabeth.

“Meet me tonight. I’ll be waiting in the chapel.” 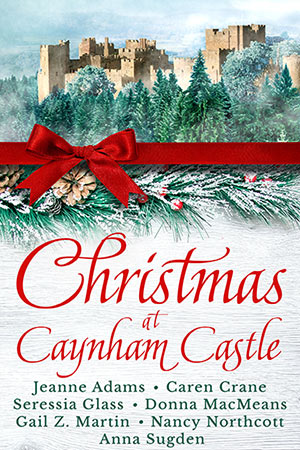