Excerpt from The Casanova Code

My heroine, Edwina Hargrove, is a closet adventurer and something of a code breaker.  She has joined with three other women who believe a notorious rake has placed a personal ad in the Mayfair Messenger seeking quiet inexperienced women.  Believing the rogue has nefarious purposes in mind, they form a group called the Rake Patrol to protect and warn the innocent women before they are got in the rake’s web.

In this excerpt, my heroine has just broken into the rake’s residence and is discovered in his library:

She tried to shrink back from him but there was little room for retreat in the corner.

His voice turned gruff.  “Why were you following me?”

“It was your personal advertisement,” she admitted.  “We thought–”

“There are others, yes.”  She looked up into his eyes.  A mistake.  She instantly felt her confidence draining so she quickly glanced away.  “We thought it unlikely that a man of your reputation would need to advertise for companionship, unless it was for…”  She paused.

“For what, Miss Grimwood?”

She winced.  “Please don’t call me that.  It’s not my name.  The real Miss Grimwood left the Crescent before you arrived.”

He hesitated.  She heard a swift intake of breath.  Apparently she had the ability to surprise him as well.  That knowledge restored some of her confidence.  “Then what should I call you?”  he asked.

She thought she heard a smile in his voice, but she could have been mistaken.  More likely it was a sneer, not a smile.  The tips of his fingers gently guided her face back toward his.  She couldn’t avoid his eyes now.

The time for fabrication had passed.  “Edwina Hargrove,” she replied.  He stood so close, His body trapped hers in place, keeping her close enough that she noted the scent of sandalwood soap on his skin, close enough that he most likely could hear her heart racing.

“Then Miss Hargrove,” he said, his voice low, tantalizing, and seductive.  “Please explain for what purpose you believed I would advertise for companionship?”

She shrugged and adverted her gaze, not wishing to admit their suspicions.

“Do you believe that a man such as myself does not deserve companionship?”

A slight catch in his voice, a slight shift in his speech pattern, both alerted her to a possible vulnerability, but she had no time to consider that now.

“No, not at all,” she replied quickly.  “We thought that a man such as yourself had ample opportunity to secure companionship through the more traditional methods.”

Demand in his eyes gazed down a straight nose past expressive lips and a dark shadow that covered his chin and defined his cheeks and, inexplicably, incited in her a desire to touch.   The moisture in her mouth evaporated making speech difficult.  She grasped Faith’s parasol more firmly.  “You…you don’t need to advertise.”

His lips – lips that were rumored to be quite experienced in all sorts of decadent acts – pulled into a half smile that resonated in places it really shouldn’t.  “I suppose I should be flattered,” he said.  “But I fail to grasp how that would lead to your need to spy upon me.”

“We thought that Casanova –”

“Casanova?”  He drew back, faintly amused.  “Do they still whisper that name?”  She nodded slowly.  He shook his head.  “I thought that had died years ago.”

His demeanor lightened, she took a welcome breath.  Glancing down the unbroken row of books in something akin to nostalgic revelry, he chuckled softly under his breath, then returned his focus on her.  “I don’t recall seeing you at any house parties, Miss Hargrove.  I would have remembered you.  How would you know of Casanova?”

“The social column of the Messenger–”

“Ah yes.”  He interrupted with a smile.  “That ridiculous column about who is wearing what.  As if the matter of jewelry flashed at one’s tete-a-tete would make the slightest difference in the outcome of world affaires.”  His smile faded, but his eyes continued to search her face, his black pupils large in the dim light.  “But go on…you thought Casanova would have no need…”

“No need to advertise unless…unless…”  It was difficult to admit the Rake Patrol’s suppositions to his face, especially as they now seemed frivolous and unsupported.  But she drew herself up and took a breath.  “Unless he was planning to lure an innocent woman for unconscionable purposes.”

He pulled back.  “Unconscionable purposes?”  He stared at her a moment and then chortled.  “I suspect you have me confused with my father.”

Such an odd response, her nose crinkled in annoyance.   “No.  I don’t believe –”

“The ad was placed to benefit another, Miss Hargrove,” he said without listening to her protest.  “Someone who is truly worthy of the love of a good woman, as it appears in your estimation, I am not.”

Confused, she fumbled mentally for a moment.  “I did not mean to imply…” He stood close, too close to discuss his worthiness for anything other than the sort of delicious unease he caused within her.  She slipped past him, freeing her back from the uncomfortable press of the shelves.  “Still,” she insisted.  “You lied in your advertisement.  Those women thought you were the person with interest.”

“The ad did not identify me,” he protested.  “I would have explained my purpose had I received the opportunity to actually speak to the respondents.”  A wicked smile spread across his face.  “I had no idea there existed an entire corps of women determined to thwart my purposes.”

She was tempted to believe him, if only for the humor in his eyes.  But his words didn’t explain the reason for this evening’s venture.  “What about the Guardians?” she asked.  “Why did you call them to a meeting this evening?”

“The Guardians?”  His brows lowered.  “What are you talking about?”

“A coded message appeared in the Mayfair Messenger that announced a meeting on this very night in this very house.”

He certainly appeared flummoxed, but it could be more of his cat and mouse game.  “It wasn’t a particularly difficult code to break.”  It was her turn to sneer.  “If you don’t want strangers to read your secret invitations, you should use a more complex coding methodology.”

He looked at her as if she spoke in scrambled text.  “I didn’t place a coded message in the Messenger.”

“There was no mistaking the address,” she insisted.  “The Guardians are to meet here at–”

They both heard men’s voices in the hallway.  Panicked, she glanced at Trewelyn.  He immediately ran his fingers along the top of a series of books on a shelf far to her left.  “Good.  It’s still here,” he murmured.

His fingers tugged on one of the books and an entire section of the wall with bookshelves swung forward.  A hidden door.  Just like those she’d read about in adventure novels.  Curiosity tingled down her backbone, but with it a cautious uncertainty.

“You can’t be discovered here.”  He grasped her arm and tugged her toward the door.  “You’ll be safe inside.”

He didn’t listen to her protest, but pushed her through the opening.  He followed and once on the other side, he pulled the bookcase door behind him.

Devoid of light, she could sense his presence even without seeing him.  It was as if he extracted the air from the space that she envisioned to be little more than a pantry.  She backed slowly, attempting to put distance between them.  Confined in a dark closet with a man known as Casanova, with only a parasol for protection.  How did she go from protecting vulnerable women to becoming one herself?

Her bustle bumped something that rattled.

She heard the click of a second latch.  “There,”  he said.  “They can’t hear us or see a light with both doors closed.”

“What is this place?” she whispered.

“It’s a place you shouldn’t be,” he stated.  His harshly-spoken words, combined with the total darkness, lifted gooseflesh on her arms.  After a moment, she heard a resigned sigh.  “Miss Hargrove, I would not have brought you here if there had been another option.  You understand that, don’t you?  Your reputation would suffer greatly if you were to be discovered alone with me at this time of the evening.”

“I’m not certain how long we will be detained here so I’m going to light the gas jet so we might safely negotiate the limited space. But in all consciousness, I must issue a warning.”

“A warning?”  Alarm rattled her already jittery insides.  Had she escaped the stew pot only to be sacrificed in the fire?  She slipped her hands behind her to investigate what she had backed into.  She discovered what felt like chess pieces that wobbled and fell to the floor.  She withdrew her hands before she did more damage.  “What kind of warning?”

“If you value your innocence–”  He struck a match that flared a moment, casting his face in stark somber shadow “– keep your eyes tightly closed.” 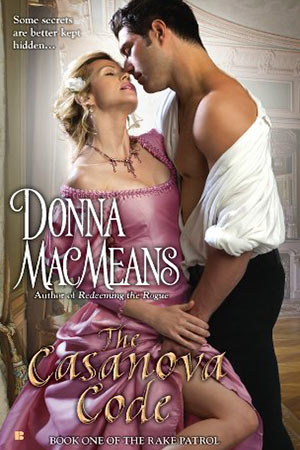