Excerpt from Bound by Moonlight

Lusinda quickly discovered several open windows on the first floor. Jupiter, some houses just begged to be trespassed. She pulled herself over the sill and slipped into the dark and silent interior of a salon. A clock somewhere to her right softly ticked the passing minutes. Mr. Langtree had suggested the watch would most likely be in the library at the rear of the house, so she quietly left the room and padded down the hallway in that direction.

The pocket watch wasn’t difficult to find. In fact, the moment she opened the door to the library, a glint of moonlight flashed on the engraved gold where it rested on the desk. The lid was open, as if someone had just checked the hour, but the desk chair was empty and no light other than that from a single window behind the desk illuminated the room. Her sense of smell never worked quite as well when she was in full phase, but she recognized the scent of candle wax, peat, and something else. Something familiar, but out of place…

She hesitated, caution suggesting she turn and flee. Still, the watch beckoned so close at hand …she only need grab it and go. She glanced quickly about the room, not able to see deep into the shadowy corners. The current owner was probably asleep in his bed, unaware that a stranger had penetrated his domicile.

She stepped over to the desk, picked up the watch and gently closed the lid. However, before she could take two steps toward the door, something fell from the ceiling wrapping her in thick heavy ropes. A trap! Panicked, she dropped the watch and ran, but her legs entangled in the foul-smelling webbing. She lost her balance and fell to the carpet.

Her worst fears realized, she fought the knotted ropes pressing into her tender skin. She choked back a cry pulling at the heavy threads, seeking an end to the encompassing snare.

A match struck and yellowish light filled the room. “I hadn’t expected you quite so soon, but I’m glad you came tonight.”
She gasped, recognizing the low mesmerizing voice. “Mr. Langtree?”

Her gaze swept the freshly illuminated corner. He had exchanged the unfashionable tweeds for more appropriate evening attire, the bushy mustache and eyebrows had disappeared, as well as the thickness cluttering up his middle. But the eyes, those intelligent assessing eyes, those were the same. His lips, now free of the burdensome mustache, lifted in a superior sneer.

Her initial fear hardened to anger. The devious son-of-a-cur! Once she escaped from this stinking fish net, she would cause havoc on his person every moonlit night for the rest of his life. She jerked the biting ropes out from under her and tried to slide beneath them to the side.

Surprised, James glanced quickly around the room. He heard her voice, but where could she be hiding? And how did she control this writhing unnatural entity trapped by the ropes? “Miss Havershaw?”

He advanced into the center of the room, searching the areas that still clung to shadows. “You can come out now.”

The net undulated with the shifting form beneath. Amazing! He could see straight through the wave of movement clear to the other side. “How do you do it?” He asked, his awe evident even to his own ear. “There’s no thread or wire. I can’t see a thing even in the light.”

There was no answer, no reply, but the bulge in the net slowly rolled toward the side approaching eminent escape. Without hesitation, he sprawled on the wave, overpowering it with the weight of his body. “We’ll have none of that,” he said, feeling it struggle beneath him. “Not until my questions are answered.”

Lord, that sweet exotic scent fairly surrounded him, overpowering even the rancid scent of the ropes. Miss Havershaw must be near. He grasped one of the smaller ripples and discovered something that felt a bit like bone.

“Get off of me, you lying, deceitful blackguard!”

The hot breath of her curses burned his neck bringing with it the realization that Miss Havershaw did not control the creature, she was the creature. The delicious discovery both stunned and thrilled.

She thrashed beneath him, not an entirely unpleasant sensation. Arousing thoughts of this she-cat similarly trapped in his bed caused him to momentarily forget the purpose of the encounter. However, a rope knot pressing into his increasingly sensitive groin brought him round.

“I’m not going to hurt you, Miss Havershaw.” He moved his hand to the spot he approximated to be her shoulder. Instead of a fabric-bound collarbone, his fingers pressed into a soft warm mound with a fleshy peak that extended between the ropes.

She gasped and instantly stilled. All his senses tuned to fingertips that circled and explored the pebbling peak. His groin tightened, not needing to see what his fingers instantly recognized.

“Take your hand off my breast, Mr. Langtree.”

“You’re naked,” he said, his body responding with acute awareness and tantalizing pressure. Common sense whispered that he should withdraw his hand, but sense, common or not, abandoned him. Her lungs expanded against his chest as she gulped for air, driving the enticing nub deeper into his palm. Her position suggested her hips, naked hips, would be perfectly situated for penetration. His throbbing manhood signaled it was up for the task. Sweet Heavens, if only he could see her to tell if desire swept through her features, the same way it played havoc with his. If only…

A quick blow to his privates ended all thought. He groaned and rolled to the side, curled in a ball like a babe. 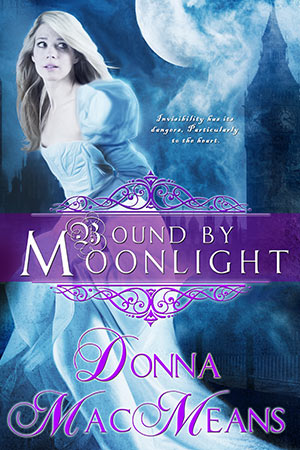